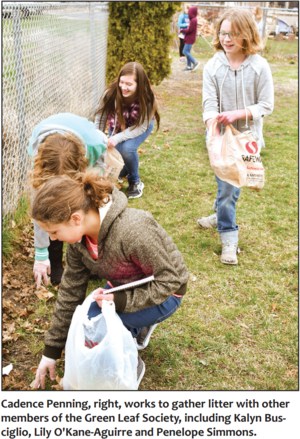 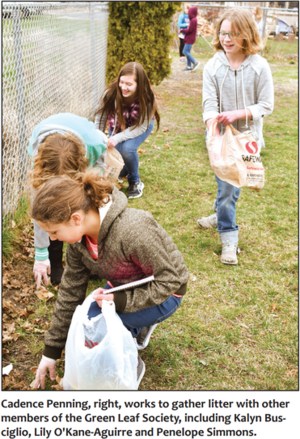 Cleaning up their world
Sixth-graders form Green Leaf Society to tackle trash problem
Cleaning up their world
Sixth-graders form Green Leaf Society to tackle trash problem
Tristen Tritt sprints across the playground, a plastic bag waving from her hand as she calls to her friends. "Over here! There's a ton over here!" she says. Four other sixth-graders join her at the fence surrounding South Baker Intermediate School, where they sift through leaves to pluck out candy wrappers and other trash — their hands kept clean by plastic gloves.
Every lunch recess, the Green Leaf Society can be seen out on the playground gathering litter or in the library for a meeting or poster-making session. The group originated as an idea from Cadence Penning, and soon the other girls joined the cause. Tristen was impacted by an image of all the trash found inside a bird, and how sea turtles can't tell the difference between a jellyfish and a plastic bag floating in the water. "We don't want this to happen to harmless animals," Tristen said.
On this Monday the five girls fill their bags with yellow strips of caution tape, assorted candy wrappers and whatever else blew in over the weekend. While they are the only ones out here with gloves and bags, they've noticed a changed attitude toward the grounds since they started litter patrol. "It seems we've been inspiring people because they've been picking up trash," Tristen said.
Although Society member Lily O'Kane-Aguirre is moving to a new town soon, she plans to continue her work on the environment. "I'm going to do it at my new school," she said. And these sixth-graders, who recently toured Baker Middle School where they'll attend next year, already plan to don gloves and pick up litter there, as well. But before they move on, they plan to talk to the other students at South Baker and hopefully get more involved in the mission. "Hopefully they'll pass it on to the new fourth-graders," said Kalyn Busciglio.
In March, the Green Leaf Society members practiced public speaking when they gave a presentation to the South Baker student council to explain their mission and ask permission to hang informational posters in the hallways. The council also suggested they made a video to present at a future assembly. "It was scary — I wish I'd practiced more," Cadence said with a smile. "I was shaking," Tristen said. But now their posters decorate the halls of South Baker, and they even have a few fundraisers in mind. First on their list of expenses? Rubber gloves for picking up trash.
Source: Bulldog Pride